Skip to Content
Home / Analysis and Advocacy / TYO raises awareness on Black July anniversary
Share
Tamil youths in London, Paris and Sydney marked the anniversary of ‘Black July’ in recent days with activities to raise public awareness of the mass killings of Tamils in Sri Lanka. Members of the Tamil Youth Organisation (TYO) in Sydney and London handed out leaflets at central locations, while in Paris they organised blood donations and participated in a march. On Friday Tamil youths in Sydney handed out leaflets and spoke to members of the public passing through Martin Place, an iconic pedestrian space in the central business district synonymous with corporate Australia. Persevering through the inclement weather, activists handing out thousands of leaflets highlighting the history of abuses against Tamils in Sri Lanka. “Awareness of Sri Lanka’s abuses is growing amongst Australia’s public. Many people here are outraged after seeing the Channel 4 documentary [about the mass killings in 2009], but most do not know there is a much longer history of atrocities such as the 1983 pogrom,” a TYO-Australia spokesperson said. “People we spoke to were incredulous that Australia’s government wasn’t more active on Sri Lanka’s war crimes.” On Monday during rush hour TYO members in London handed out leaflets and chatted with commuters at entrances to Liverpool Street, one of the capital’s busiest stations located in one of its two major financial districts. Continuing its summer long public awareness effort, TYO-UK’s leafletting focused on the ‘Boycott Sri Lankan Cricket’ campaign. “Rush hour is always a hectic time with people running for their trains, but mention of Sri Lanka often caught people’s attention, and people reached for a leaflet to read on their journey, some stopping to talk to us,” a TYO activist said. Full Article: http://www.tamilguardian.com/article.asp?articleid=3316 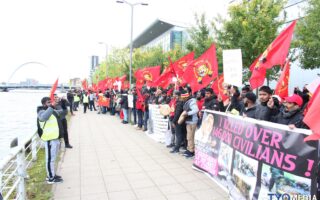