I screamed. I ran. I hid. Just a few hours ago we were all learning the required First Aid skills to attend to wounded people. The workshop was meant to last ten days and we were in our second day. There was a total of 400 students attending the same workshop. At 7 am Kfir jets were seen from a distance and we assumed it was flying elsewhere, but it was quickly approaching us. The bombing began. We all started running and as I was lying there I was wondering: “Why us? What have we done?” I was praying for the jets to go away but they came back and they used more military weapons to attack us. I saw my friends getting wounded and killed. Everything was in complete disorder with everyone running in every direction to find better cover in-between the strikes. With my heart in my neck I ran to attend to the injured girls and we carried them to safer places. As we were helping them the jets would come back and we would have to run to cover. When attempting to assist other girls we’d get hurt ourselves. It could have been any of us. 14th August 2006: 53 of our sisters died, 150 were wounded, lost limbs, had severe burns and had many injuries. 3 staff members also lost their lives. The attacks were brutal and the memories from it will always remain with the girls. 16 bombs were dropped in total over the orphanage in Vallipuram by four Sri Lankan State owned jets that flew over Vanni. It was known to be a humanitarian zone and the GPS coordinates of the area had been passed to the SL military by both UNICEF and the Red Cross. Innocent Tamil children were targeted. Why? Because they knew the next generation of fighters will be born and we will take what is ours. Those kids had lost their parents during the war and had already suffered a great deal. The children were labelled as “terrorists” and the orphanage labelled as a training camp by the Sri Lankan government. But international aid workers confirmed that this was definitely absurd as there were no evidence for the presence of the LTTE. “I would urge the international community to unreservedly condemn the Colombo government for the aerial attack, and to exert pressure on the GoSL to adhere to basic humanitarian principles.” Ms Mary Arulappan Juliet We remember you girls and we will not stop until we gain justice for the lives you lost. They say the war is over. But, have we gained justice, have we gained Tamil Eelam or have the Tamil people been allowed peace? No. Slowly and subtly every evidence of the existence of Tamils are being eradicated – our people need us. So as we promise ourselves today, we will keep going. We will keep going until our Tamil people are free from genocide. 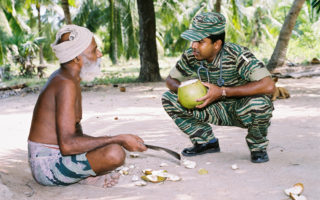