The event is held every year to mark the importance Tamil Students’ Associations (TSAs) across Canada play in the Tamil community and mark the transition of the executive teams at the beginning of the academic year.

TSAs are instrumental in promoting the Eelam Tamil identity of Canadian Tamil students and this year’s event, held at the Princess Banquet Hall in Scarborough, Ontario, saw the handing over of the Tamil Eelam national flag from the outgoing to the incoming executive teams.

Members of the Canadian Federation of Students, the largest student group in Canada, attended the and supported the event. Executives signed in and out of the “Red Book” to symbolise the beginning of their term on the TSA.

In addition to university students, TYO – Canada also invited high school TSA executives to be part of the ceremony. Further, members of the Tamil-Canadian community also attended the event to encourage the youth leaders of the current generation. 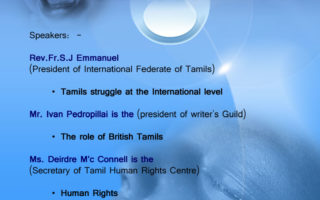