Skip to Content
Home / Arts and Culture / Poem about the oppression that the Tamil nation is facing in Sri Lanka
Share
On the 4th of February, the Tamil Youth Organisation was invited by ‘Come Together London Rally’ to celebrate London’s multi-cultural community. The rally was held inTrafalgar Square from midday and lasted for around three hours.

TYO was given the opportunity to read a poem out and explain about the oppression that the Tamil nation is facing in Sri Lanka. The poem was the recount of a Tamil witnessing the massacre of their brothers and sisters. Various communities were given the opportunity to express and share their views through speeches and poems. The British Chinese community also took part in the event. We thank ‘Come Together London Rally’ for inviting us and support our struggle for justice and freedoma genocidal state.

TYO was then involved in creating awareness among the visiting public. Flyers were handed out and people signed cricket boycott postcards. The flags of many nations were drawn on the ground of Trafalgar Square, the flag of Tamil Eelam was one of them. 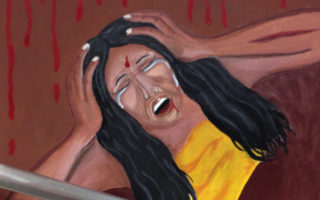