Skip to Content
Home / Press Releases-English / ‘May 18th defines precisely what cannot be reconciled’
Share
On this day, we the Eelam Tamil nation around the world, gather together to remember one of the darkest days in our nation’s past. Three years ago, on May 18th 2009, decades of brutal and systematic oppression and killing of our children, our men and our women, reached a peak. Three years ago, we the Tamil diaspora, watched the horrors unfold, distraught and unable to put an end to it. Three years ago, the pleas and cries of the Tamil nation in the North-East, here in London, and around the world, fell on deaf ears. We have not forgotten. Eye-witness video footage that has since come to light depicts the undeniable allegations of war crimes and crimes against humanity in its full horror. Accountability for these crimes must go to the highest levels of the Sri Lankan government and the military. There is no doubt that this systematic, intentional, targeted, persecution of the population of Vanni, was genocide. There can be no reconciliation without the truth, and there will be no peace without justice. Yet, despite much international condemnation, frequent calls for justice and some small steps forward, three years on, the Sri Lankan government has proved itself incapable and unwilling to conduct any meaningful inquiry into what took place, and still there has not been an independent investigation into what took place. Three years on, with no justice for those that were killed in the final months of the armed conflict, and on a background of decades of impunity for crimes against Tamils, the enforced disappearances, the torture, the rape and the murder of Eelam Tamils continues. Three years on, as the Northeast remains in the grasp of a Sinhala military that is relentlessly colonising Tamil land, the Sri Lankan government’s claims of reconciliation and peace remain far from reality. Three years on, our oppressed, subjugated, and forcibly displaced nation in the North-East lives in a state of fear, without the freedom to demand justice, and reduced to a state of basic survival that suffocates political aspirations. The atrocities that took place, and abuses that continue to occur, will not be forgotten. They leave a deep scar in our nation’s collective consciousness, and will continue to fuel our struggle against oppression. Justice must begin with accountability. However, in Sri Lanka, there can be no accountability or truth without an international inquiry. It is not merely what happened in 2009, under the hands of one government and one military leader that fuels our enduring sense of injustice. It is the inherently Sinhala–Buddhist chauvinistic nature, of successive Sri Lankan governments for over 60 years. Successive governments that have consistently introduced election-winning policies, that sought to destroy our culture, our history and our people. And, that destruction wrought, has been repeatedly met by triumphalism or apathy by the overwhelming majority of the Sinhala media, Sinhala judiciary, the Sinhala Buddhist clergy, and the Sinhala people. History makes two things very clear. Justice cannot be compromised on and oppression will not be tolerated forever. The Arab spring is a case in point. People oppressed by the state will ultimately protest, and when their peaceful revolt is met by military arms, they too will take up arms to resist it. Like other oppressed youth around the world, Tamil youth, of every generation have struggled against the genocide our nation has faced. The means have varied, but the struggle has always gone on. It is not merely those of us living across the world who have worked tirelessly to demand justice for our nation and to counter the oppression faced, even now, amidst the military’s stranglehold on the North-East, the Tamil youth have not stayed silent. Defying military orders not to hold any acts of remembrance, the Tamil youth have resisted the oppression. From the defiant acts of the Jaffna university students who November last year, let off flares to commemorate Remembrance Day, to the protests staged outside the university against the so-called grease-devils attacks by the Sri Lankan military, and the anonymous posters that go up in the dead of night, condemning the Sri Lankan governments colonisation and oppression – the past three years have seen countless acts of resistance. Just yesterday, Paramalingam Tharsananth, the secretary of the Jaffna University Student Union was attacked by gang of army intelligence officers, who battered his head with iron bars. His only ‘crime’ was to help organise the university’s May 18th remembrance event. As the Sri Lankan state continues to fail to provide justice for the Tamils, and instead adds to our nation’s grievances, there is a very real risk that history will repeat itself. After decades of oppression and persecution, the yearning of our nation to break free from its clutches, and live peacefully goes on. Three years ago, tens of thousands of Tamils perished as the Sri Lankan army annihilated the Vanni. As we wept, the world urged reconciliation. Yet three years on, May 18th defines precisely what cannot be reconciled. As we remain confounded by our nation’s collective loss, the Sinhala nation praises its government and celebrates its military. What the Eelam Tamil nation calls genocide, the Sinhala nation calls ‘victory’. And so, on a day like today, as we remember May 18th at Mullivaikkaal, we are ever more resolved that our nation’s security, the island’s peace and the region’s stability lie in Tamil Eelam. The address was delivered by Visakan Balakumar, a member of TYO UK and student at the Imperial College London. 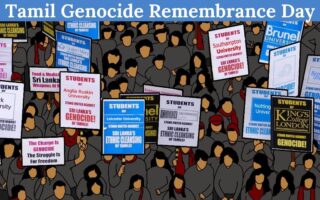