Skip to Content
Home / Arts and Culture / TYO worldwide denounces LLRC, upholds sovereignty, calls for independent international probe
Share
Joint statement by the diaspora organisations Respecting the nationhood of Eelam Tamils, accepting the existence of their traditional homeland and facilitating their right to national self-determination are crucial to ending the ongoing genocide of Eelam Tamils on the island of Sri Lanka.

Joint statement by the diaspora organisations Respecting the nationhood of Eelam Tamils, accepting the existence of their traditional homeland and facilitating their right to national self-determination are crucial to ending the ongoing genocide of Eelam Tamils on the island of Sri Lanka.

Given the recent increased international interests in the island of Sri Lanka, emergence of new evidence of most heinous crimes committed there and shift in global attitudes towards better human rights protection, Eelam Tamils expected a shift in policy by member states at the 19th session of the UN Human Rights Council (UNHRC).

Encouraged by the March 2011 report of the UN Experts Panel and the February 2012 resolution of the European Parliament, both of which concluded that there should be an independent international investigation into recent war crimes and crimes against humanity committed on the island of Sri Lanka, Eelam Tamils have engaged states and non state actors to bring about a resolution protecting human rights and promoting international law at the 19th session of the UNHRC.

On 7 March 2012 the United States tabled a draft resolution for the consideration of member states.

Eelam Tamils deeply regret the decision of the United States to show regard for the Lessons Learnt and Reconciliation Commission (LLRC), which was set-up by the very leaders of the Sri Lankan regime that is accused of committing grave violations of international law. We also note the decision of international human rights groups to boycott the LLRC because it failed to meet basic international standards for independent and impartial inquiries and proceeded against a backdrop of government failure to address impunity and continuing human rights abuses.

We are also reminded of the failure of the International Independent Group of Eminent Persons (IIGEP), a committee appointed by the international community to assist a Sri Lankan commission of inquiry address serious human rights violations, in 2007 because of interference from Sri Lanka’s ruling regime, and in particular the then attorney general and current chief of the LLRC, Mr C. R. De Silva.

With experiences in mind, Eelam Tamils agree with international human rights organisations that the LLRC has been deeply flawed from its onset; on that basis, the LLRC has been unable to produce any credible or constructive recommendations.

Further, we are deeply concerned by reference to demilitarisation of the north of the island alone, when much of the east of the island, which together with the north makes up the Tamil homeland, is occupied under the pretext of high security zone by ever increasing numbers of Sri Lankan military personnel.

Eelam Tamils urge the international community to respect our nationhood, accept the existence of our homeland and facilitate our struggle to national self determination, by way of ending the conflict on the island of Sri Lanka and ensuring stability in the region.

To this effect a coalition of Eelam Tamil organisations submitted a draft resolution aimed at “halting the genocide of Eelam Tamils on the island of Sri Lanka and implementing a permanent political solution to the conflict between the two nations on the island” for the consideration of member states at the 19th session of the UNHRC. 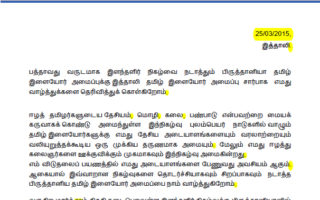