Skip to Content
Home / Arts and Culture / GTYL proudly present ‘Aadukalam 2011’
Share
The Global Tamil Youth League is proud to present the winners of ‘Aadukalam 2011’, the first international Tamil dance competition, hosted by the Tamil Youth Network on the 22nd of October, 2011 in Theater Leo 17, one of the most prestigious venues in Munich, Germany.

Talented dancers from many different countries participated, all vying for the grand trophy.

The theme of ‘Aadukalam 2011’ was ‘In pursuit of Global Peace’. This was portrayed by the talented young dancers through many innovative ways. The dancers portrayed their emotions for their desire for global peace by integrating many aspects of the need for freedom from oppression, dignity and self-determination into their dance routines.

The event commenced with the release of balloons outside the venue, with messages of hope for global peace by the audience and dancers attached to each balloon.

The traditional lighting of the oil lamp, by the Project Coordinator Viulan Kulasegaram, followed inside the venue.

The competition was interspersed by song performances and comedy acts including a performance by MC Sai, who was greeted by rapturous applause from the audience.

All teams worked together to ensure a fair and sporting competition was held, with dazzling performances by the countries that took part.

The performances were judged by an international panel which comprised of Wallice King, Docas Huber and Nigetha Vijayakumar. “It was a great show. The participants have shown great passion and good performances. I am looking forward to being a part of Aadukalam 2012,” said King, a

native South African and performer in many musicals including Lion King and Africa! Africa!.

Participants have also shown great excitement for the competition, one participant remarked, “An international stage ensured greater visibility, talent recognition and awareness. It also allowed Tamil youths to recognize and represent the similarities in terms of hopes we have, despite being in different countries.” said Bairavi Ratnabal, team leader from United Kingdom.

Further prizes for the competition were awarded for following categories:

‘Aadukalam’ showcased the talents of Tamil youth in dance throughout the world in an energetic, competitive and reputable arena.

Veenagaran Rajalingam, one of the Aadukalam coordinators concluded the event with a speech.

“Through this competition, we achieved to see participants engage in an art they love, while simultaneously representing a part of their aspirations for global peace.” he said.

Global Tamil Youth League was initiated by youth from different countries across the world in order to reach, unite and empower Tamil youth to excel as leaders and architects of our nation. 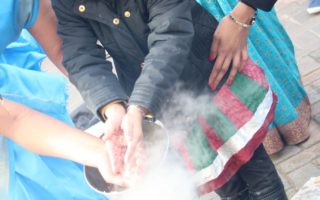