Despite growing international outrage over the Sri Lankan military’s mass killings of over 40,000 Tamil civilians in 2009, the Sri Lankan government is defiantly refusing to heed international demands for an independent investigation into the atrocities. Instead it is escalating a range of discriminatory and repressive policies towards the Tamil people.

Australia’s cricketers should take a principled stand in defence of human rights and justice, and boycott play with Sri Lanka until the government there conducts itself according to the rules of international society. In doing so, they will have the support of the Australian people, the Tamils, and all those the world over concerned with human rights, justice, and human dignity.

Australia is among many countries calling for an independent investigation of Sri Lanka’s mass killings – something the Tamil people and international human rights groups have long been demanding. On July 7 the Australian Senate unanimously adopted a resolution calling on the government to actively press Sri Lanka on “meaningful accountability” for the atrocities.

An independent investigation into Sri Lanka’s war crimes and crimes against humanity is not the demand of a self-serving small minority, as the Colombo government and its supporters claim, but of a broad section of the international community.

It comes from states like Australia, Britain, India, the United States, blocs like the European Union and the Commonwealth, and international human rights organisations like Amnesty International and Human Rights Watch, as well as, of course, those who, having suffered so much, continue to be denied justice and a lasting peace – the Tamil people.

Yet Sri Lanka has contemptuously brushed off such international criticism. Amidst brazen denials that its troops committed any atrocities, the government claims that investigating its conduct during the war would undermine ‘reconciliation’ – an unabashed fiction given that its post-war domestic policies are doing precisely that, politically and economically marginalising the Tamils.

Sport is inseparable from politics. Nothing sends a clearer message of international abhorrence of a government’s conduct than when it is shunned by international sportspeople. Conversely, nothing gives a repressive regime greater legitimacy, and makes light of its brutal conduct, than continuing sporting links.

Almost exactly forty years ago, in September 1971, the Australian Cricket Board cancelled the scheduled South African tour of Australia. This was a crucial early act in what eventually became the sporting isolation of the Pretoria regime that later contributed in no small part to the dismantling of Apartheid. More recently, a cricket boycott, supported by Australia, was also crucial in ending the recalcitrance of Robert Mugabe’s repressive government in Zimbabwe.

In his 2008 speech in London to the MCC, Archbishop Desmond Tutu hailed the international cricket boycott for bringing home to the Apartheid regime’s supporters the strength of the international community’s opposition to their government’s policies, and thus convincing them to pressure their government to change. This is also what a boycott of Sri Lanka would accomplish.

As in the previous boycotts of South Africa and Zimbabwe, it may entail some financial cost to cricket. However such principled action can but burnish the sport’s now historic reputation for actively contributing to decisive political change for the better. That can only be to the greater good of one of the world’s most popular, enduring and respected sports.

Teams representing countries like Sri Lanka, whose regimes brazenly abuse human rights with impunity, should not be allowed a role in international sport. To do otherwise is to legitimise these regimes and whitewash their crimes.

This is why the Tamil Youth Organisation (TYO) has been conducting the ‘Boycott Sri Lankan Cricket’ campaign this year. When Sri Lanka toured Britain this summer, we raised awareness amongst cricket fans with demonstrations and leafleting campaigns outside the venues. We are gratified by the encouragement and support we have received from so many fans we met, sporting commentators who also raised the issue in their columns, and international cricketing figures and players who have corresponded with us.

Some of them have understandably raised the question as to whether a sports boycott will undermine reconciliation and unity in post-war Sri Lanka.

It will not, because there is no meaningful reconciliation underway in Sri Lanka, but exactly the reverse.

For reconciliation to be possible, there must be a just and durable political solution to the long-simmering ethnic tensions that led to the war starting in the first place, as well as a full accounting for the war crimes and crimes against humanity during the recently ended war. As the international community has repeatedly pointed out, both are fundamental for any meaningful reconciliation to be possible.

Yet it is precisely these that Sri Lanka is rejecting. Just as it stubbornly argues that its troops committed no atrocities, the government also insists there is ‘no ethnic problem’ to be solved. Due to international pressure, it has recently sporadically engaged in ‘talks’ with elected Tamil leaders, but pointedly refuses to engage with them in any substantive discussion.

Meanwhile, over two years since the war ended, the Tamil areas remain under an oppressive military dominance, where the army dictates what economic, social and political activities are possible. Even the forthcoming local council elections in Jaffna are marked by widespread intimidation and violence against opposition parties, including the main Tamil party. The military meanwhile still refuses to withdraw from the tens of thousands of Tamil homes it occupied during the war, forcing hundreds of thousands of Tamils to live in shacks, live with relatives or leave the country.

Under these circumstances, it is a fiction to talk about cricket promoting unity in Sri Lanka. Amid the government’s refusal to accede to a political solution and accountability for war crimes, and its continuing militarised repression in Tamil areas, cricket can no more be a unifying force across Sri Lanka’s communities than whale-watching, or any other human pastime.

Australia’s cricketers to take a principled stand in defence of human rights and justice, and to boycott Sri Lankan cricket, including cancelling the forthcoming tour, until the Sri Lankan government heeds international calls and permits an independent investigation into the mass killings of 2009. 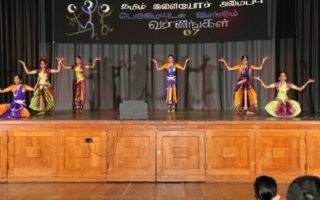