The students and teachers of Jaffna University courageously commemorated the fifth year anniversary of the Mullivaikal massacre yesterday despite various threats from anonymous sources.  The university reopened yesterday after an ordered closure in an attempt to stop such remembrance events saw hundreds of students and staff gathered in the auditorium remembering the lives lost during the final stages of the war.  Candles were lit in memory of those who were killed at the hands of the genocidal state and the message ‘Our heartfelt prayers for our loved ones who perished at Mullivaikal’was also seen displayed at the university. As the state continues to perpetrate acts of genocide on the Tamils, attempts to instill fear in students and silence their voices for justice, the observance of Mullivaikal remembrance at the university shows that the memory of Mullivaikal cannot be extinguished.  The acts of intimidation and harassment seen are nothing new to the Tamil nation.  The Jaffna University Teachers’ Association President Mr Rasakumaran has been summoned for an investigation to the 4th Floor (recognised torture centre) by the Terrorist Investigation Department.  The denial of the democratic right to observe Mullivaikal on May 18th, also known as Tamil Genocide Day is unacceptable.

The Tamil Youth Organisations strongly condemns these acts of violence.

Half a decade has passed since the end of the 2009 genocidal massacre of Tamils, the Tamil nation has been under seize of the Sri Lankan army for over six decades.  Rape, torture, abduction, lack of media freedom and open attacks on media, land grabs and Sinhala colonisation proves the genocidal intent of Sinhala nation over Eelam Tamils.

We collectively urge the International Community to:

– Hold a UN monitored referendum to solve the national question of the Eelam Tamil nation.

– Recognise the Eelam Tamils right to self-determination and sovereignty.

We stand in solidarity with the Jaffna University students! 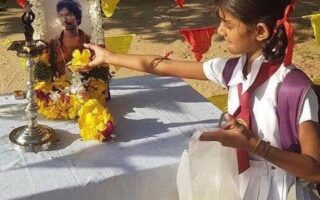